A common refrain throughout my time and travels in the grain business is the concept of “selling the carry.” This is roundly regarded as a good thing to do whether you’re a farmer, elevator, speculator, back-to-back trader or basis trader. Just that last sentence is reason enough to raise one’s antennae to the possibility that while we are using the same term, we may be referring to something completely different. Is it possible that people in different types of businesses with very different trading methods and goals all need to do the same thing? 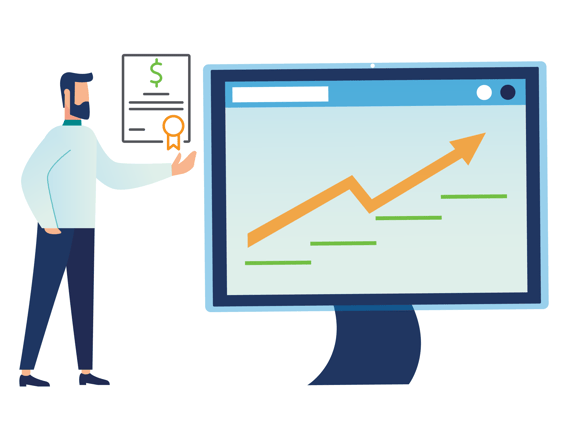 First, let’s quickly define what we mean by “carry in the market.” Simply put, a carry market is defined by deferred futures months’ prices being progressively higher the farther into the future it gets from the nearby month.

For many in both the grain production business as well as the commercial grain handling business, managing this piece properly can significantly add to the bottom line. Unfortunately, it takes both awareness and discipline to effectively capture it and a lot of bushels both on farm and in commercial hands are missing its full value.

We have been in an extended period of large supplies and carryover domestically which has led to low prices and year-over-year carries in the futures market. Recently the CME Group has also announced that they are making changes to the corn and soybean contracts beginning in fall 2019 with the stated goal of larger carries in the market in times like these with large supplies. There is a lot of reasoning and theory behind this, but ultimately, we in the grain business need to make sure we are selling, or capturing, the carry effectively because it is likely going to become an even greater piece of the pie starting this fall.

The key questions to address are:

1)  When can the carry be sold and captured?

Let’s first discuss timing. Prior to the crop being harvested, there can be a considerable amount of carry from the spot market to the first new crop month. This carry belongs to the proactive farmer. The only way this carry can be captured by the farmer is for him to sell his new crop production well before harvest. The farther in advance he can sell, the more carry there is to be captured.

A great example of this has been hard red winter wheat over the last several years. On the top of this page is a chart showing how much of a price premium above harvest price was captured over the last 10 years on average. 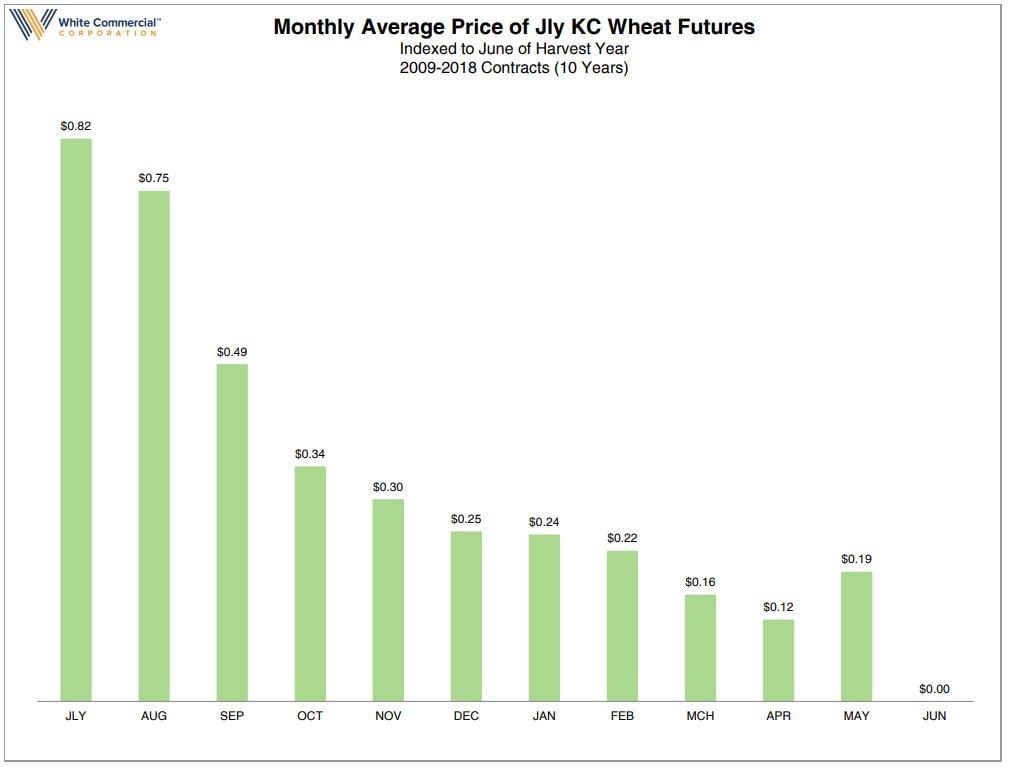 That’s right, over the last 10 years, on average, a farmer could have sold more than 80 cents per bushel better by selling one full calendar year prior to wheat harvest.
Other grains have similar patterns. Wheat is so exaggerated because there has been such great carry in their markets. The farther ahead of harvest a farmer can sell in a carry environment, the more they can capture. This doesn’t even require the farmer to have their own bins. The farmer can sell the carry well ahead of harvest for harvest delivery and capture all of that. Simply put, when a farmer forward contracts his grain in the midst of a carry market, then he is capturing the carry in the market.

Once harvest occurs and the grain goes into a bin, the carry from that point on belongs to the owner of that grain bin whether it is a farm bin or a commercial bin. In either scenario, however, the carry can only be captured once the grain has been sold by the farmer.

For a producer, this may seem counter-intuitive, but the only way to capture the full value of these carry markets is to make selling decisions sooner. Many producers look at a carry market and assume it gives them more time to put it in a bin and wait to sell. This line of thinking is a recipe for disaster.

Allow me to illustrate this point. It’s fall and harvest is winding down. The local elevator’s spot bid for corn is $3.47, but their January bid is $3.70. The farmer decides since the January bid is better, he will wait until then to sell. When January rolls around, the elevator’s bid is now $3.47… again.

That 23 cents of “carry in the market” vanished. Neither the farmer nor the elevator got it. In order to capture all of the premium offered by the carry in the market, the producer must sell early for the deferred delivery periods while there is still carry to be captured. Otherwise, the carry can vanish over time.

As a grain originator, it’s important to communicate to your customers these simple ways that they can be capturing premiums available to them. Before harvest, they should be selling ahead. If they have their own bins, they can sell even more carry in post-harvest delivery slots. That extra carry and many times extra basis premium of selling early for an after-harvest delivery time is how the producer should be generating value for his space.

For the commercial grain elevator, it’s commonly accepted that big carries are good environments for them to make good margins. While that is definitely true, it can only be done if the elevator owns the basis as soon as possible (harvest). Once the grain hits the commercial bin, the commercial cannot capture the market carry without buying the grain.

Carries allow the commercial grain business to improve the value of their basis ownership over time. If they do not own the basis because the grain is on storage or a delayed pricing contract, they are capturing fees from the farmer instead of market carry.

I think of the tragedy out west with wheat in recent years. There have been mountains of wheat piled on the ground for multiple years. During that time there have been some very large carries. Unfortunately, it has evaporated into thin air for many because the commercials were competing over who can charge the least for storage. So, they charge 1.5 cents/month to the farmer while the price falls and the large carries of more than $1.00 per bushel per year go to no one at all.

We are staring down the barrel of some changes in corn and soybeans going forward and being able to capture the carry for both the farmer and the commercial grain business will be more important than ever. It is up to the grain merchandisers and originators to act prudently and help their customers act prudently so that the value of these carries does not vanish into thin air.

If you'd like to hear more on this general topic, then take a few minutes to listen to the following episode of The Elevator's Cut podcast.

I ran across this in my favorites folder the other day.  I thought it a worthy reminder of how being successful in the ...

END_OF_DOCUMENT_TOKEN_TO_BE_REPLACED

According to recent statistics, financial fraud is on a significant upswing. Last year, 82% of businesses in the United ...