I want to initiate a Public Relations Campaign within the farming community to get BASIS the respect and understanding it deserves.

It is my belief that there are a lot of myths, misconceptions and misinformation floating around that give farmers the wrong perception about the importance of basis in their farm marketing decisions and because of this a lot of time and attention is spent needlessly discussing and worrying about something that brings them little benefit.  And so it is my mission in this PR campaign to provide the real story of the impact and value of BASIS to the farming operation.

The fact that there is such a thing as BASIS that provides the industry with a different way to value grain is extremely important to the workings of the grain business.   The existence of basis brings a harmonious and symbiotic component to the marketplace – one in which each party in the grain marketing chain benefits from the success of the other.

As the one who begins the process – It is imperative to our industry that our farmers be able grow bountiful crops and make money doing so!  We all want the farmer to prosper – from those that collect, store and redistribute the bushels – to those that process and feed it – to all of us who enjoy fine dining!  We all need prosperous farmers.

But it’s not through BASIS that the farmer’s money is made …it is by selling at a good PRICE – a price that is over and above the cost of production.  What BASIS does is to provide others involved in the grain marketing chain the means to operate their businesses successfully without being in competition with the farmer over PRICE.

By being able to operate in the realm of two different grain marketing worlds – the farm and the businesses they sell grain to can work together with complete cooperation. 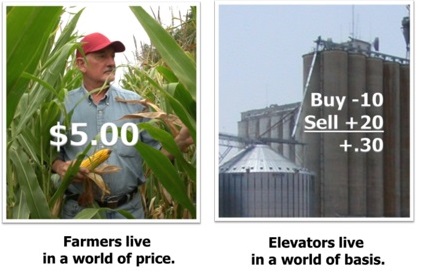 And you know who benefits the most from this structure?  It’s the local community!!!!  Done right – it brings an influx of money into the local community from outside the area which supports a vibrant, growing economy.  When new money is flowing into the community this is good for both its businesses and the families who live and work there.

With that in mind, let me begin my Public Relations Campaign by first dispelling some of the myths about the BASIS.

When the elevator’s basis is -40 that’s the margin they are making off of the farmer’s grain.

What matters to an elevator is the range of movement.  If there is the potential for the basis to move within a 30¢ range in a given year, the elevator wants to buy at the low end of the range and sell at the high end of the range.

So who decides local basis is going to be -50 rather than +30?  Here again, it’s a force of the marketplace.  The local elevator sets its basis based on what the local processor (or feeder, or terminal, or ethanol plant) are paying.  The processor (and others) set their basis depending on what others in and around the area are paying.  It is a ripple affect.  The processor has to compete with the river market who competes with the rail market, and so on.  So, although basis is a function of local economics, it is also influenced by supply and demand outside the area as well as the cost of freight to move it there.

It’s said that the function of basis is to move grain from where it is to where it needs to be.  Basis numbers will fluctuate to accomplish this in the most efficient manner possible.  Sometimes it works back to the local farmer to be -50 and other times +30 -- it’s the marketplace as a whole that decides.

It is to the farmer’s benefit to sell at a high basis.

Not most times.  Basis and price are two different animals influenced by different factors.  It is often the case that when farmers are given the opportunity to sell at a high price, the corresponding basis is low.   Conversely when the basis is high, the price is low.  Just take a look at the following chart that shows the variation between price and basis.  As a farmer, would you rather sell twenty over $2.00 corn or fifty under $6.00 corn?  It’s counterproductive for farmers to base their selling decisions on what the basis is – it is the price that matters.

Which would you want?

Basis takes money away from the farmer.

One point I would like for people to understand most from this PR Campaign is that price and basis are driven by different forces.  As a result, basis takes nothing away from the farmer and, in fact, it puts the farming and elevator operations in an ideal position to be each other’s greatest supporters!

To understand this, consider where the price and the basis come from.  Price is the result of a free market discovery process carried out through the grain futures market that is the culmination of factors of global proportions.  As we all know, no single individual or group controls the price … certainly not a local grain buyer in small town America -- it’s a force of the marketplace as a whole.  This is good for the farmer because there can be any number of things that can spark a rally (it doesn’t have to be his crop in distress).

Basis, on the other hand, is another way of valuing grain that is determined by the needs and circumstances of the local marketplace.  It is driven by the availability of local supply and its ability to satisfy local demand.”  I say availability because there can be a hefty supply of grain in the area but it may not always be in the hands of a willing seller.

Because basis is influenced by the flow of bushels in the local market, it is closely tied to farmers’ selling patterns.  When circumstances are such that farmers are active sellers (rally in price, harvest, tax time) the excess bushels entering the marketplace drives basis lower.  Times when farmer selling is slow (periods of low price, busy with field work) basis moves higher to entice the bushels it needs from other sources (basis traders).

When farmers complain that the basis is no good, I argue that it is they themselves and their collective actions that set the tone of the basis.   When the situation is favorable for farmers to sell – the fact that they and others are actively selling is going to drive basis lower.  Like price, it is not something that they or anyone else can change or control – it’s a force of the marketplace.

What farmers do control is their decision to sell.  In making this decision there is only one thing that will put money in their pocket … a profitable price.  In the grand scheme of things basis is irrelevant to the farm’s marketing outcomes.  I ask the question again, would you rather sell twenty over $2.00 corn or fifty under $6.00 corn?  Keeping a focus on locking in profitable prices is the way that the farming operation succeeds!

I do believe there is a huge benefit the farmer receives from the basis that goes unrecognized.  That is the value of having a strong ally in their local elevator who is not in competition with them over price.  Thanks to basis, elevators are able to be price neutral.

Can you imagine how difficult it would be for grain to get traded if all the parties were in competition over price?  Fortunately, that is not the way the grain trade works and, in fact, the goals of the price-oriented farmer and the basis trading elevator complement each other beautifully.  A high price that is favorable for the farmer to sell often coincides with a low basis favorable for the elevator to buy.

Having a profitable grain elevator in the community is just as important as having profitable farmers.  Obviously, to keep the lights on elevators need to make money.  Basis enables them to generate income from a different source rather than relying on collecting fees from the producer.  Take away the basis opportunities from the elevator and one of two things happen:  fees go up or the elevator goes out of business.  Keep basis in the hands of the elevator and there is more money in everybody’s pockets -- money that elevators, in turn, reinvest in their facilities to better serve the grain handling needs of the producer.

Working in such a win-win environment where both parties benefit from the success of the other is the strength of the grain industry.  And it’s all made possible by the existence of a little thing called BASIS.  Spread the word.