According to recent statistics, financial fraud is on a significant upswing. Last year, 82% of businesses in the United States suffered an instance of fraud, and 50% of those businesses lost money as a result.  In fact, if the business of fraud were a country it would be the fifth largest country in the world, following only the GDP of the United States, China, Japan and Germany.  And smaller businesses with fewer than 100 employees generally suffer the largest monetary losses, often due to a lack of established systems and controls to detect, uncover and prevent fraud.

Access the Webinar Now:  Fraud Mitigation in the Grain Industry

Although it can be embarrassing to admit to being a victim of fraud, the majority of people have experienced some form of fraud attempt. In incidents of fraud time is of the essence.  It is important to consistently keep an eye out for signs of fraud and to immediately call your financial institution’s fraud department if you detect anything suspicious.  The highest increase in fraud today involves business email compromise, but fraud is also perpetrated through fraudsters requesting wires, requesting ACH's, or requesting credit card or check payments.

Fraud experts use what is called the "Fraud Triangle Theory" to explain what tempts an employee to turn to fraud. 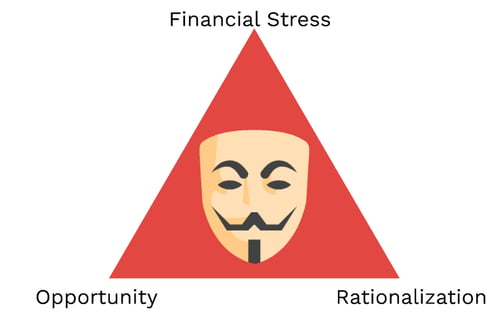 “Humans are the weakest link in the payment chain” is an important phrase to remember. Your employees want to be helpful and help solve problems, and fraudsters take advantage of that generosity. So consistently communicate to your employees that if they see something, say something. It has been shown that taking a precaution as simple as setting up a confidential Fraud Hotline can reduce monetary losses by up to 50%.

When it comes to fraud, every minute counts, and the more we talk about it the better. When you do talk openly and frequently about fraud, even the most difficult situation can have a positive outcome.

To this end, White Commercial and CoBank have put together a Fraud Mitigation Webinar and Best Practices Checklist to give you and your company practical insight into the fraud prevention measures that you can begin taking today to add security to your company’s daily routines and practices.  Use this link to view the on-demand webinar and get instant access to the best practices checklist.

END_OF_DOCUMENT_TOKEN_TO_BE_REPLACED

The Consequences of Paying Too Much At Harvest

Competition is the driving forces that determines a fair and equitable price.  For the most part, your cash price to ...