If there is anything that the past several seasons of farming has taught us, it’s that there is indeed nothing new under the sun. Looking back, the “new plateau” for grain prices which we heard so much about in the halcyon days of 2007 and 2008 has manifested itself on the price charts of history more in the shape of Mt. Everest; running up quickly, seemingly holding their own only to fall nearly as fast as they rose back to the levels most would call “normal”. While this transition back into an environment more in line with the long term tendencies of a commodity cycle directly influenced by the basic economic tenets of supply and demand has been less than welcomed wholeheartedly, it is indeed the world we are residing in today. Although it is true the days of being rewarded in spite of not having a grain marketing plan are behind us, it certainly does not mean that there aren’t opportunities for the producer who has a plan for dealing with adversity. 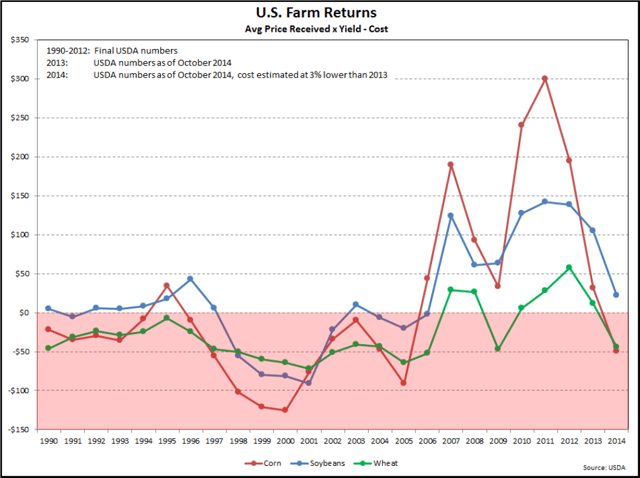 Talk in the coffee shop right now is that there isn’t any profit to be had currently, for any crop; but have you run your numbers yourself? Knowledge is the beginning of wisdom, and having a good grasp on your production costs is this first step in obtaining a wise marketing strategy. Costs have certainly dropped from last year; do you know exactly to what degree they’ve dropped for your operation? Do you have this figure already? Great. If so, you are 20% finished implementing your personalized grain marketing plan. That feels pretty good, right? Well guess what; if you can come up with your average expected yield (if you can’t, I bet your crop insurance agent can), now you are 40% done with your plan! Knowing these two key pieces of information alone has put you near the halfway point of building your grain selling masterpiece. Worry not if you’re unsure at the moment on these two values, as they will both eventually become fully realized; one when you pay all those invoices headed for your mailbox, the other when the combine runs through the field. 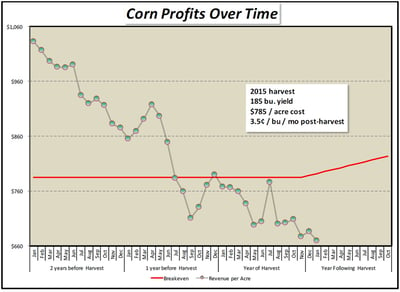 This next step in putting your marketing strategy into place is likely to be the most vital decision you will make all year. In fact, this single choice will have the potential to set the tone not only for 2016, but for all the years to follow. This one decision is really the only one you must make that can’t be made by someone else; what is your profit goal? Having your cost of production and expected average yields figured in, your breakeven level is now a known item. Now it’s up to you to decide at what level above this to begin selling your grain. Is it at the breakeven level itself, in order to cover costs so that even if the market continues the downward trend that has been going on for nearly 4 years now you can still come out ahead? Is it at an 8% ROI that the farming operation needs to sustain its progress? And if we’re having this discussion with regards to the 2015 crop, is the point at which you need to take action one where profit isn’t possible, but perhaps one where you need to draw a line in the sand and set a limit on the amount of losses you will let that crop accrue? Sometimes it is better to make the mistake than to keep making the mistake. It’s a tough choice, but one that will not go away on its own accord. This is indeed the hardest of the three values to come up with, but one you must determine, lest someone else (your lender perhaps?) make it for you. With this number now set, you are now 60% complete! The math involved now is (COST + PROFIT) / YIELD = TARGET PRICE. That’s right, our old, reliable, FREE and hard working (17.5 hours a day to be exact) friend the target contract. 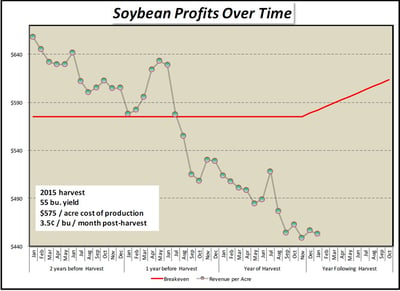 Certainly, the target contract was, by some folks, relegated to the dust bin of farm marketing history during the heyday that was the past decade or so. Yet, for those who know its timeless usefulness, it has held its rightful place as perhaps the best marketing tool out there. For these target contracts to be successful, they must be set using the aforementioned process, not merely by using the latest price du jour (“but I need $4.25 for my corn…I think”). Last year the magic number was $5.00, the year before it was $6.00; who knows, next year it could be $3.50. The point is, perhaps your number is $4.12, something you likely wouldn’t have come up with on a whim; you’ll never actually know for sure until you do the ever so simple math required. And timing; targets can be set well ahead of harvest, sometimes one or even two years out. This means that you now have the time for the market to work in your favor, as opposed to chasing some phantom price from season to season (the accompanying charts show how the 2015 price timeline played out). Lastly, and most importantly, target contracts are FREE; this is a trait that NOT ONE single post harvest marketing alternative can provide, even those that claim to pay a premium to the farmer. Speaking of which, premium is just another word for risk; you likely don’t pay your homeowners insurance agent a premium each year just because he’s a nice guy, you pay it because you want him to build you a new house if yours burns down. You pay him for that risk. If you are receiving a premium on a contract, it is imperative that you understand the risk that you are agreeing to accept. Know the downside, and more importantly, know if you can afford that potential cost! Once you’ve entered your target contracts into the market to begin working, you are in the home stretch at 80% complete. Congratulations!

This final point cannot be stressed enough; if you postpone your marketing until after that bushel has been harvested, you are already behind the curve. Costs do nothing but GO UP, everyday, until that bushel is sold, no matter what marketing alternative you go with. Along with this fact is another that we all know to be true; the market does not have to keep up with your costs. In fact, in such cases as this past year, as evidenced by these charts, unsold bushels from harvest 2015 have experienced a double whammy of increased marketing costs paired with a declining market price. This is not a position you can stand to be in if you intend to keep farming in the long run.

So what makes up the final 20% of this grain marketing process? How do you achieve 100% success with your farm marketing program? It’s simple; ACT NOW! Call us to get this program started and get these target contracts entered, for this is the ONLY way that this process will work. No guessing, no worrying about factors that you can’t control, just taking that step to sell your grain at a level that will keep you in the occupation and lifestyle you hold near and dear to your heart. With this fifth step you’ve chosen to be deliberate in your marketing decisions, not giving in to the “anxiety peddlers” out there who make a living by keeping the farmer indecisive about his income. You’ve recognized that the risk of growing a crop and not having it sold is greater than the risk of having a crop sold and not growing it. And finally, you’ve taken the actions necessary to ensure you can do this farming thing all over again next year.

A proactive approach to farm marketing has scarcely been more vital than it is today. We find ourselves in a world that is awash in grain, claiming both a record level of food AND fuel that we were told could never happen. The unexpected does happen, and you must be prepared to exercise a marketing plan that will withstand the unexpected. Droughts and options will not be your permanent savior; proactively taking profit off the table when it’s available will.

For a more in depth look into this philosophy as well as the tools used to execute this plan, click below to learn about our grain origination course.