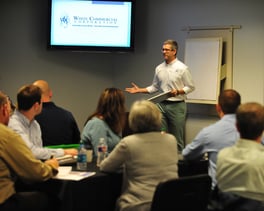 Despite the general feeling of malaise in the grain business that is currently affecting much of the country, it is important to put such an observation into proper perspective. While it is true that, thus far, the year 2015 has proved to present a far greater challenge for grain merchandising than in the recent past, it is not altogether a place most have never visited. In retrospect, the last several years have made the activity of buying and selling grain easy, almost too easy, even to the point where perhaps some were lured into the belief that not much effort or skill was involved in the process. I’d venture to say that those same folks might now be at a loss at how to handle the present situation, and those who’ve been around a while may be realizing that some of those skills developed during the pre-2007 years have begun to atrophy just a bit.

What is the current capacity of my local market?

There’s no question that the recent increases in farm storage have shifted this value, but what about producer selling patterns? In a tight window, is enough freight available to move the bushels? Will the end users be able to handle four months worth of grain movement in two months or less? Can you live with the consequences of spot market margins?

What is happening on the larger stage?

No matter the location of your dot on the map, you are more than likely facing the very same old and new crop grain origination challenges as everyone else. Are you aware of the bigger picture? What are the successful merchants doing right now to make the most of current circumstances?

What story is the basis telling me?

With so much on farm grain reluctant to turn itself into cash, basis has responded accordingly. It will continue to do so, at least until the other factors in the market are reconciled to this fact. Grain always has and always will move from where it is to where it isn’t. When is the tipping point this year? How will Harvest 2014 Part II affect Harvest 2015?

Where are the opportunities going forward?

Unless you are retiring or selling your business today, you will have bushels to merchandise, eventually. The market will continue to use grain in the months and years ahead; the spreads will attest to this. Are you so caught up in the angst of the present situation that you are inadvertently turning down favorable circumstances down the road due to inattention?

Are you addressing the needs of your farmer customers rather than scoffing at their wants?

History tells us time and again that the needs of life trump the wants in life. Everybody seems to want $5 for their corn, but do they know what exactly they need for the crop to cash flow? I bet their banker does. While this fact won’t change the level of the market, it will help shift the focus from a fear of lost opportunity to a plan to address the real concern of lost income.

Phone not ringing? Nobody stopping by the elevator to talk about selling? Great. This gives you time to prepare your plan of action to address these issues. Grain will move again; the laws of reality dictate this. Will you be ready when the pendulum finally begins to swing the other way?